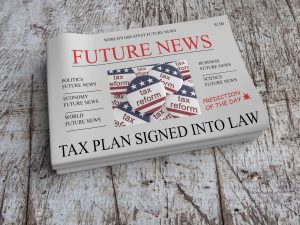 The new Tax Cuts and Jobs Act amends the Internal Revenue Code (IRC) to reduce tax rates and modify policies, credits, and deductions for individuals and businesses. It is the most sweeping update to the U.S. tax code in more than 30 years, and from what we’re seeing, it impacts everyone’s tax situation a bit differently.

What works for one individual or family may not work for another, although their circumstances may appear to be similar on the surface.

Here are some of the key features of the tax reform legislation that you need to know about as an individual tax payer. (I’ll cover the impact on businesses in a separate post.)

There are still seven tax brackets, however the rates have dropped in all except the lowest bracket. The new maximum tax rate was reduced from 39.6% to 37%, which applies for those earning over $500,000 annually, if single, or $600,000 if married.

Here is a comparison of the old and new tax rates: 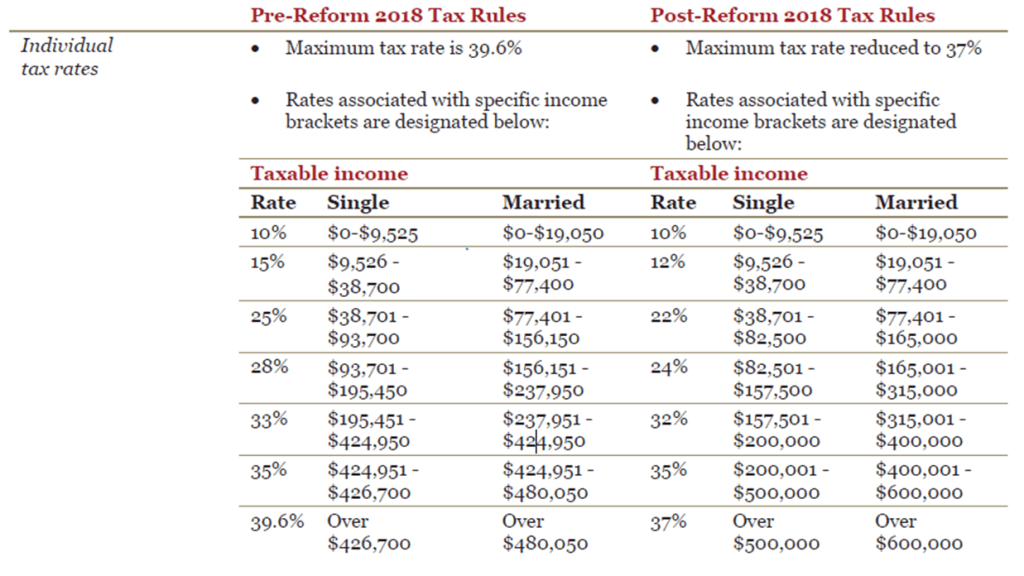 While these changes are likely good for everyone, I do have some clients who are married, filing jointly and when I recalculated their taxes under the new law, the results were not what we expected. The husband and wife both work, and it turns out they’re only going to save $200 in taxes! So that’s why it’s important to work with your accountant and look at your situation individually.

The alternative minimum tax (AMT) is a supplemental income tax imposed by the United States federal government. AMT is a separate tax calculation that is run after the regular tax calculations are done. The taxpayer pays the higher of the two taxes. Although this was supposed to be a tax to ensure that everyone, including the wealthy, pay some tax, in the past it did hit many middle income wage earners.

Under the new law:

So we expect we will be seeing fewer middle income wage earners subject to AMT.

The standard deductions have nearly doubled to $24,000 (married) and $12,000 (single), however there is no longer any personal exemptions allowed at any income level.

Individual deductions for state and local taxes (SALT) for income, sales, and property are limited in aggregate to $10,000 for married and single filers and $5,000 for married, filing separately. What this means in a high real estate tax state like New Jersey, where you’re probably paying more than $10,000 a year in real estate taxes, you’re going to be taking a hit starting in 2018.

Most miscellaneous itemized deductions – for example, tax preparation and investment expenses – that had been subject to the 2% of adjusted gross income (AGI) floor will no longer be allowed.

As far as capital gains, there were no changes to the tax rate. The maximum rate on long-term gains and qualified dividend income (before 3.8% net investment income tax) remains at 20%.

As the reform bill was being negotiated, there had been talk of doing away with the medical expense deduction completely, which would have hurt the elderly. Instead, they reduced the floor to 7.5% of AGI for tax years 2017 and 2018.

Fortunately, there were no changes to how securities are treated. You can continue to specify which stocks you’re selling, which means if have a lot of the same stock, you can pick your highest basis so that you have the lowest amount of capital gain.

You will no longer be penalized if you don’t have health insurance. Starting in 2019, the new legislation eliminates the Affordable Care Act’s individual mandate.

Before the tax law changed, you could deduct mortgage interest on mortgages up to $1 million, if you’re married, and $500,000 if you’re single. Interest on a Home Equity Line of Credit (HELOC) could be deducted up to $100,000. Under the new law, individuals are allowed an itemized deduction for interest on a principal residence and second residence up to a combined $750,000. Mortgages obtained before 12/16/17 are grandfathered and new purchase money mortgages may be grandfathered if the purchase contract is dated before 12/16/17.

Refinancing of grandfathered mortgages is grandfathered, but not beyond the original mortgage’s term and amount, with some exceptions for balloon mortgages. Interest on HELOCs is no longer deductible.

You will still be able to do a like-kind exchange on real estate, but no longer on personal property. This type of exchange allows for the disposal of an asset and the acquisition of another replacement asset without generating a current tax liability from the gain on the sale of the first asset.

If you have a Section 529 plan, you can now pay up to $10,000 a year per student for high school education. This had always been limited to college, but now if you are paying public, private or religious high school tuition, you can use some of your 529 here.

Under the new tax law, the estate, gift and generation skipping transfer (GST) tax exemptions are doubled to $11.2 million per US domiciliary.  These exemptions sunset after 2025 and revert back to the law in effect for 2017 with inflation adjustments. There’s a possibility for “clawback” at death if the law is not changed.

If you own a business that is set up as a partnership, S-corporation, or sole proprietorship, income was passed through to your individual tax returns, where it was taxed as ordinary income. There is now a new 20% deduction for qualified business income from a partnership, S-corp, or sole proprietorship. There are some income limitations to this deduction, so be sure you consult your tax advisor on this one.

We still have deductions for charitable contributions. Under the new law, a contribution made to public charities is deductible, as long as it doesn’t exceed 60% of the taxpayer’s AGI – this is up from 50% of AGI.

At KRS, we’ve been tracking tax reform legislation closely and are ready to assist you in your tax planning and preparation now that it is finally signed into law. Don’t lose sleep wondering what impact the new law will have on you and your family. Contact me at 201.655.7411 or mrollins@krscpas.com.