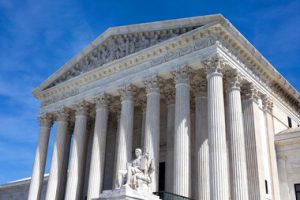 It has long been the rule that a state cannot collect sales tax from a vendor that is selling products in that state, unless that vendor has a physical presence, called a nexus. However, on June 21, in a 5-4 decision, the Supreme Court swept away the nexus rule in South Dakota v. Wayfair, Inc., saying states could collect sales tax even if there is no physical presence.

The brick-and-mortar stores are happy with the ruling, because it levels the sales tax playing field. The states are ecstatic because they can collect more sales tax. But there are complexities, and no one is entirely sure how it will play out in the long run.

Who is affected by this sales tax ruling?

First of all, the Supreme Court did not say that states must collect sales tax or how, only that they could. It is up to the 45 states that impose a sales tax to decide how they’ll take it from here. For example, South Dakota, which was the plaintiff in this case, requires collection for retailers with more than $100,000 in annual sales or 200 separate transactions, so at least in that state, it doesn’t heavily affect “mom and pop” operations that may only do a few hundred dollars in sales in a given state.

But the real problem for online retailers is not that their prices will effectively rise, but that the cost of compliance could be enormous. For example, one expert noted that in New Jersey, marshmallows are candy, and thus taxable, while marshmallow fluff is a food, and not taxable. Multiply these subtle distinctions by 45 states and the compliance complexities become overwhelming. The real winners may be outsourcing companies that can lift the compliance burden from small online retailers.

Bigger online retailers may fare better, as they have greater resources. Amazon, which was not a party to the lawsuit, has already been collecting sales tax, so it was not deeply affected by the decision. But Amazon competitors such as Wayfair and Overstock may now struggle to update their systems to collect sales tax as effectively as Amazon has been doing.

However, Amazon also hosts third-party retailers, which may now have to figure out how to collect sales tax. Some states may require Amazon, as the platform host, to bear some responsibility here.

The problem is that there is no national standard, and there is the possibility that Congress will step in eventually and impose a uniform system for managing sales tax. But there is no concrete plan yet, and it may be difficult to create one. Sales tax is complicated. In fact, the New York State Department of Taxation and Finance once noted it received more requests for rulings on sales tax issues than on all other taxes combined.

For those who like to predict what might happen, the situation is further complicated by the unusual politics surrounding this issue. Although many tax and finance issues come down to conservative versus liberal, that was not true here. Ruth Bader Ginsburg, one of the court’s most liberal justices, sided with the majority along with the very conservative Clarence Thomas. But Chief Justice John Roberts, also conservative, sided with the rest of the liberal justices in his dissent. This means it could be hard to predict how individual state governments, or Congress, will act, based on party affiliations.

The new ruling on online sales tax can be confusing. Rather than guessing at where your business stands let an expert help. Contact Kelley DaCunha, CPA, at [email protected] or 201.655.7411 to discuss your situation.

Get Balanced: Business Made Easier
Get the latest on the new tax law plus other insights and tips to keep your business growing.
Get Balanced Now!